Two Brazilian researchers specialising in neurosciences, Steven Rehen and Flavia Gomes, were recognised on 11 July in Rio de Janeiro at the Servier Fiocruz award ceremony. This award was launched two years ago by Olivier Laureau in partnership with the governmental foundation Fiocruz, whose mission is to combat major public health issues in Brazil. For the first time, the award was given in recognition of research conducted in two fields: infection by the Zika virus and neuroinflammation and neurodevelopment disorders. 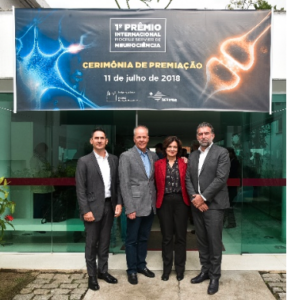 Mr Rehen’s research shed light on the causal link between infection by the Zika virus and microcephaly. Through his research he strives to identify drugs capable of limiting the viral infection without affecting neuronal growth.

Ms Gomes studies the role of glial cells, which form the environment of neurons, in the development of new neuronal disease therapies. Her work has led to a better understanding of these molecules’ mechanism of action and helped to identify new pharmacological targets.

During the ceremony, Servier and Fiocruz also signed a technical-scientific cooperation agreement. The aim of this collaboration is to evaluate the physiochemical and biological properties of natural product samples, to identify those that offer the necessary characteristics to become a candidate cancer treatment. According to Christophe Sabathier, CEO of Servier in Brazil, “Brazil has tremendous research potential in the field of natural products.”

“The partnership between Servier and Fiocruz, which aims to identify candidate drugs for the treatment of cancer, implies that our teams will transfer technologies and share their experiences with one another,” said Fernando Pontes Soares, Head of Servier’s ICTR in Brazil. “The agreement also offers the possibility of transferring drugs with potential for development to the Brazilian public health system.”